Asafoetida or Hing a spice used in the Indian kitchen.

There are many amazing herbs and spices which we can use in our kitchen to make our food more tasty and healthy.  Hing is one of them and it is unknown in the western kitchen but a secret spice of the Indian cuisine. 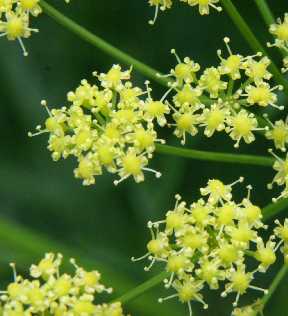 Asafoetida or Hing, the dried gum, derived from the roots of various species of the genus Umbelliferae “Gerula” is mainly used in vegetarian cuisine of India
The 2-3 m high perennial with yellow-green umbels grows in desert areas, especially in Iran, Pakistan, and Afghanistan.  As early as 2000 BC  asafoetida was used to season the food.  Afroetida or Hing was particularly used by the Romans very frequently.

Asafoetida is mainly used in ground form as a powder. The gum of the roots can not be ground  easily because of this previously fenugreek seeds are added .

Asafoetida or Hing tastes bitingly pungent, bitter and very strongly of garlic. It smells very strong and unpleasant . However, the smell fades when cooking.

In India  sauces, pickled vegetables, like chutneys and pickles, as well as legumes and fish are flavored with Hing. The north Indian use the spice for meat and vegetable stews, like Kormas. Dosed in small amounts it amplifies other spices and flavorings. The leaves and stems are often used as a vegetable. It is better to use Asafoetida or Hing sparingly.

Read  more about the use of this Spice below.

You may be interested in The Everyday Ayurveda Cookbook: A Seasonal Guide to Eating and Living WellEat delicious seasonal food, balance the body and heal the gut with simplified, traditional Ayurvedic wisdom and over 100 simple recipes designed to get you cooking in the kitchen.

HOW TO MAKE AMAZING FLAVORFUL CURRY

Asafoetida, also known as hing, is a latex gum extracted from several species of a perennial herb, Ferula. It is available in the market as a solid brick or smaller pieces, as well as in tablet or powder form.

This potent-smelling spice is commonly used in Persian and Indian cooking for flavoring, food preservation, and fragrance. Due to its strong odor, it is also called Devil’s dung. From a nutritional perspective, asafetida provides protein, fiber, carbohydrates, calcium, phosphorous, iron, niacin, carotene, and riboflavin.

Here are the top 10 health benefits of asafetida.

Due to its anti-inflammatory, antiviral and antibiotic effects, asafetida is often used to treat respiratory problems like asthma, bronchitis, dry cough, whooping cough, and colds. Plus, it acts as a respiratory stimulant, which is very useful in relieving chest congestion and releasing phlegm.

Asafetida is really a boon for women, as it helps get rid of menstrual pain, irregular menstruation, and heavy blood flow during menstruation. Asafetida boosts progesterone secretion and promotes smooth blood flow, and thus provides relief from these common female issues.

Whether you have a headache due to a common cold or a migraine, asafetida can surely solve your problem. Due to its anti-inflammatory properties, asafetida can help reduce inflammation of the blood vessels in the head, which in turn will reduce headaches.

Asafoetida Or Hing Secret Spice Of The Indian Kitchen

The moment my boyfriend — now husband — and I got serious about our future together, my father-in-law got serious about teaching me to cook Indian cuisine. My boyfriend was already skilled in the kitchen. But Dr. Jashwant Sharma wanted extra assurance that the dishes from his native country would always have a place in our home. Plus, as he told me recently, he thought I’d like it.

“We mix four, five, six different spices in a single dish. These create a taste and aroma that you don’t get in any other food. People exposed to it usually like it,” he said.

Even before our cooking sessions, I knew that cumin and coriander are common ingredients and that turmeric will turn your fingers yellow. Hing, however, was something entirely new to me.

Europeans gave it the decidedly unflattering moniker “devil’s dung.” Even its more common English name, asafoetida, is derived from the Latin for fetid. Those unaccustomed to it can respond negatively to its strong aroma, a mix of sulfur and onions.

Hing comes from the resin of giant fennel plants that grow wild in Afghanistan and Iran. The resin can be kept pure, but in the States, you mostly find it ground to a powder and mixed with wheat. In The Book of Spice, author John O’Connell describes how Mughals from the Middle East first brought hing to India in the 16th century.

Many Indians use hing to add umami to an array of savory dishes. But for the uninitiated, hing can be a tough sell. Kate O’Donnell, author of The Everyday Ayurveda Cookbook, says that she only included hing as an optional spice. “For a Western palette, hing can be shocking,” she says.

More about Asofoetida >The Monsoon Spice: How Hing (Asafoetida) Can Help You This Rainy Season

WHY IS INDIAN FOOD THE BEST FOR VEGANS?