Her first Vegan Breakfast Cake she started to create when she was 12 years old in 2012. She discovered her passion for baking and cooking. The teenage girl said it was because of her huge sweet tooth. Clara loves cooking, baking, cleaning, and dancing. Her pets are three dogs.

Clare also has a blog where she writes about her activities, like bake sales for charity. You also can find recipes and place orders for her cakes and see the catering for Italian dinner party, vegan fest, brunch pop-up, and music fest. And she has a menu not only for cakes and cupcakes but also for Canneloni, cookies, bars, and pies. Visit her Site Clara Cakes and learn about her activities.

Clara Polito just published her first cookbook Clara Cakes: Delicious and Simple Vegan Desserts for Everyone!, Read the story about this awesome teenager who makes the best vegan breakfast cakes below.

The Best Vegan Breakfast Cake Made By A Teenager

It’s 7 AM and I’ve told myself I’m not going to eat leftover Breakfast Cake this morning. I get out of bed and walk into the kitchen, where a pink cake box innocuously rests on the counter. I mercilessly attack the leftover cake with my fork, hovering over the box like a monster. This has happened two days in a row. Breakfast Cake has low-key ruined my life.

You’d do this too (please tell me you’d do this too) if you had baked goods by Clara Polito in your house. The vegan teenager just wrote her first cookbook published by powerHouse Books, and it’s filled with creative and delicious dessert recipes like the one for Breakfast Cake. 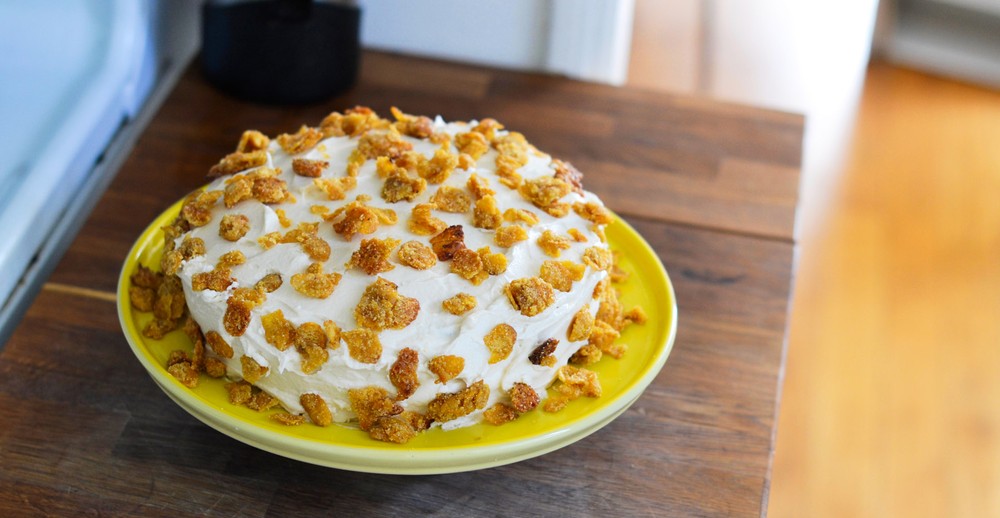 Breakfast Cake, you addictive delight. My beautiful nightmare. All photos by the author.

A few days before my Breakfast Cake addiction began, I met up with Polito at her home in Los Angeles to learn more about Clara Cakes: Delicious and Simple Vegan Desserts for Everyone!, which debuts on March 7.

Inside the sunny Atwater Village apartment, Polito told me about her meatless history. Her mother, Colleen, became a vegetarian at the age of 16 for ethical reasons. Polito followed suit at the tender age of five, then made the switch to veganism at 14. “I read more about factory farming and the dairy and egg industry, and felt that being vegetarian wasn’t enough anymore,” Polito said.