Most of the processed food we buy is loaded with artificial things which has to make it taste. If this chemicals would not be in there nobody would be ready to eat it . Most processed foods also contain a number of additives, like artificial flavors, colors, and preservatives.

This foods are a composition of artificial ingredients which make it taste and also makes it look good with food dye .
Many of us would reject to eat this stuff if we knew what really is in there. Here is a history of Food Dye .
Did it get better ? is it less health threatening ?
Read and the tales and build your opinion.

The Truth about Food Dye and Cancer

Do You Know This About Food Dye ? Another Reason To Eat Natural

MARGARINE USED TO BE PINK, AND MORE COLORFUL TALES FROM THE FOOD DYE INDUSTRY

Multi-colored cereal. (Photo: frankieleon/flickr)
A version of this post originally appeared on the Tedium newsletter.

It’s common today to hear food experts raise concerns about the amount of artificial dyes in our foods today, but this is actually a problem that has decreased with time: we’re in much better shape now than we were in the Victorian era.

At the dawn of the industrial age, food vendors realized they had to put bold, beautiful colors out there to ensure customers would buy their wares. Problem was, many such vendors were using materials that were far from edible. Lead, copper, arsenic?

Those are just three of the things that might be hiding in those bright delicacies being sold on street corners back in the day.

Fortunately, German scientist Frederik Accum was there to call the food industry out for these nefarious practices. After living in London for decades and seeing the way food was messed with, he finally became disgusted enough to write a book on the matter, A Treatise on Adulterations of Food and Culinary Poisons.

In the book, Accrum noted that vendors would dye spent tea leaves, reuse spent coffee, and contaminate both wine and cheese with lead. 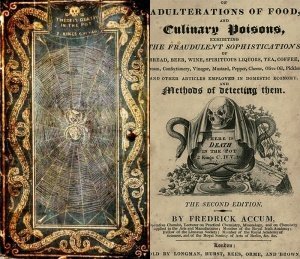 But Accum’s naming-names approach came with its own set of problems; eventually, he found himself facing so much legal trouble after the publication of his book that he had to move back to Germany.
Fortunately, Arthur Hassall was there to follow in his footsteps. Hassall, a chemist and microscope expert, was able to prove that the food-maker Crosse and Blackwell was using copper to make its pickles look greener.

It was a pretty great gotcha that helped lead the British government to pass the Food Adulteration Act in 1860.
“Hassall’s work showed that adulteration was the rule rather than the exception and that adulterated articles were often sold as genuine,” The Royal Society of Chemistry’s Noel Coley wrote of Hassall. “He was meticulous both in his scientific work and in accurately recording where and when the samples had been purchased.”

Since then, the nature of how we use food coloring has changed significantly—thanks, in part, to science and a stronger understanding of the negative impacts of what we eat.

“Companies use food coloring to simulate the presence of a fruit or a vegetable,” Michael Jacobson, the executive director of the Center for Science in the Public Interest, told Good magazine in 2011. “To be honest, they’re used to cheat people—to mislead consumers. It’s cheaper to use these than the real thing.” 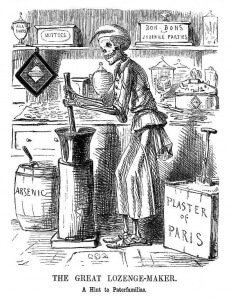 A warning about food adulteration in the cartoon “The Great Lozenge-Maker. A Hint to Paterfamilias” (1858) by John Leech. (Photo: Public Domain/WikiCommons)

But back in 1906, when the Pure Food and Drugs Act was passed in the United States, you could find more than 80 different coloring agents in wide use on store shelves.

These days, after a battery of tests that proved just how dangerous some of those substances were, we’re down to just seven approved dyes.
Continue reading here >TALES FROM THE FOOD DYE INDUSTRY

And here how it is today

“Beyond the behavioral problems and cancer risks, the greatest hazard that dyes pose for children may also be the most obvious: They draw kids away from nutritious foods and toward brightly colored processed products that are high in calories but low in nutrients, such as fruit-flavored drinks and snack foods. Those types of foods are a major force in America’s obesity epidemic.”

FDA Decides to Keep U.S. Consumers in the Dark

The Lancet study prompted the British Food Standards Agency (FSA) to issue an immediate advisory to parents, warning them to limit their children’s intake of additives if they notice an effect on behavior. They also advised the food industry to voluntarily remove the six food dyes named in the study and replace them with natural alternatives if possible.

As of July 2010, most foods in the EU that contain artificial food dyes were alsolabeled with warning labels stating the food “may have an adverse effect on activity and attention in children.” And this prompted many food manufacturers to voluntarily remove the dyes from their products.

This is why if you eat a Nutri-Grain strawberry cereal bar in the United States, it will contain Red 40, Yellow 6 and Blue 1. But that same bar in the UK contains only the natural colorings beetroot red, annatto and paprika extract.

In fact, the UK branches of Wal-Mart, Kraft, Coca-Cola and Mars have removed artificial colors, sodium benzoate and aspartame from their product lines as a result of consumer demand and government recommendations.

In the United States, however, the Food and Drug Administration (FDA) continues to allow these toxic ingredients in countless popular foods, including those marketed directly to children.

FDA Decides to Keep U.S. Consumers in the Dark

At the end of March 2011, the FDA held a session to discuss the science on food dyes and hyperactivity – and decided that warning labels are not necessary on U.S. foods that contain artificial color.

“FDA concludes that a causal relationship between exposure to color additives and hyperactivity in children in the general population has not been established.”

This is despite not only the Lancet study but also a 58-page report from the Center for Science in the Public Interest (CSPI). In “Food Dyes: A Rainbow of Risks,” CSPI revealed that nine of the food dyes currently approved for use in the United States are linked to health issues ranging from cancer and hyperactivity to allergy-like reactions — and these results were from studies conducted by the chemical industry itself.