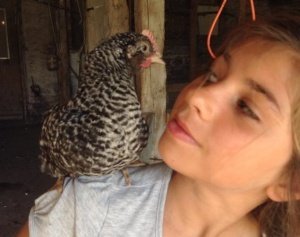 Vegan kids are getting more.
These days the media is full of animals abuse stories and our kids see them too. Many have animal friends and do not like if they are badly treated. They have compassion for the animals in factory farms. Usually, it begins with a picture
or a story the kids see and then they reject to eat meat.
These days kids use the internet to get more information.
What should you do? Be happy and let them eat more vegetable fruits legumes and grain. This is anyways much healthier for them. No hot dogs or burgers anymore.
There are beautiful vegan recipes for vegan kids.
Really be happy if they make this choice.

Bill Clinton and Mike Tyson have joined the ranks of Ellen DeGeneres and Portia De Rossi in adopting a vegan diet. They clearly signaling the popularity of the diet among adults. What I’ve been hearing as I travel around the country, though, is that more and more kids are adopting a vegan way of eating, and some parents who are unfamiliar with it are curious about this new trend, especially since it’s so different from what they grew up with. So how should you react when your child announces one day, “Mom/Dad, that’s it — no more meat, dairy, or eggs for me!”?

First of all, be really happy. Children today are in the worst physical shape of any generation in history. One in three is overweight.  An abnormal cholesterol level, one in five, while still in high school. One in three children born in 2000 will develop diabetes at some point in his or her life, according to the Centers for Disease Control and Prevention. A child who has decided to go vegetarian — or, better still, vegan — gains a measure of protection against all of these problems. And isn’t it a great thing that your child cares and is concerned about where his or her food comes from? Good job! Developing and acting on empathy is surely a good thing for everyone.

The American Dietetic Association, which reviewed all of the science on vegan and vegetarian diets, says that they are better for our children than diets that contain meat, dairy, and eggs. In the ADA’s position paper on plant-based diets, they write, “Vegetarian diets in childhood and adolescence can aid in the establishment of lifelong healthful eating patterns and can offer some important nutritional advantages.” As just one example, researchers studied a group of 1,765 children and adolescents in Southern California, and vegetarians were, on average, about an inch taller than their meat-eating friends.

That makes sense: Look at the many athletes who are now going vegan because it improves their endurance and performance: